In the current chapter, we will be looking at nested loops and how to use for loops to draw various figures on the console, that contain symbols and signs, ordered in rows and columns on the console. We will use single and nested loops (loops that stay in other loops), calculations, and checks, to print on the console simple and not so simple figures by specified sizes.

Print on the console a rectangle made out of 10 x 10 asterisks.

Write a program that receives a positive number n and prints on the console a rectangle made out of N x N asterisks.

The task is similar to the previous one:

A nested loop is a construction where the body of one loop (the outer one) stays inside another loop (the inner one). In each iteration of the outer loop, the whole inner loop is executed. This happens in the following way:

Here is an example that illustrates nested loops. The aim is again to print a rectangle made of N x N asterisk, in which for each row a loop iterates from 1 to N, and for each column a nested loop is executed from 1 to N:

In Python, when the standard initial value of the variable in the loop (i = 0) does not work for us, we can change it with the above syntax. I.e. when we want the loop to start from 1 and rotate to n inclusive, we write: for i in range (1, n + 1). The first value in parentheses indicates the beginning of the loop, and the second - the end of the loop, but not including, i.e. the loop ends before it is reached.

Let's look at the example above. After the initialization of the first (outer) loop, its body, which contains the second (nested) loop, starts to run. It prints one line n of asterisks. After the internal loop completes its execution in the first iteration of the external one, then the external one will continue, i.e. will print a blank line on the console. Then the first loop will be updated and the whole second (nested) loop will be executed again. The inner loop will be executed as many times as the body of the outer loop is executed, in this case, n** times.

Print on the console a square made of N x N asterisks:

The problem is similar to the last one. The difference here is that we need to figure out how to add a whitespace after the asterisks so that there aren't any excess white spaces at the beginning and the end:

Write a program that receives an integer n and prints a triangle made of dollars of size n.

The problem is similar to those for drawing a rectangle and square. Once again, we will use nested loops, but there is a catch here. The difference is that the number of columns that we need to print depends on the row, on which we are and not on the input number n. From the example input and output data, we see that the count of dollars depends on which row we are on at the moment of the printing, i.e. 1 dollar means the first row, 3 dollars mean the third row, and so on. Let's see the following example in detail. We see that the variable of the nested loop is connected with the variable of the outer one. This way our program prints the desired triangle:

Write a program that receives a positive integer n and draws on the console a square frame with a size of N x N.

We can solve the problem in the following way:

Here is an example implementation of the above idea with nested loops: 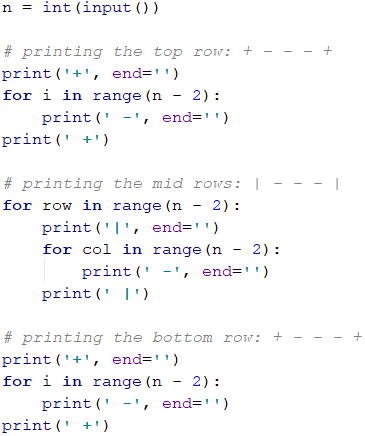 Write a program that receives a positive integer n and prints a rhombus made of asterisks with size N.

To solve this problem, we need to mentally divide the rhombus into two parts – the upper one, which also includes the middle row, and the lower one. For the printing of each part, we will use two separate loops, as we leave the reader to decide the dependency between n and the variables of the loops. For the first loop we can use the following guidelines:

The second (lower) part will be printed similarly, which again we leave to the reader to do. 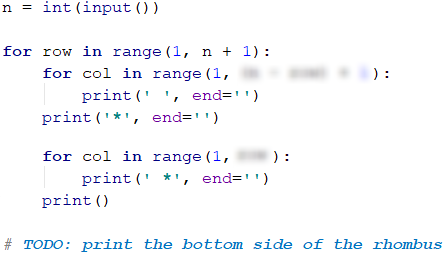 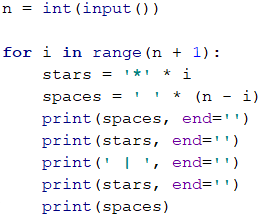 Let's look at how to draw figures using nested loops with more complex logic, for which we need to think more before coding.

Write a program that receives an integer n (3 ≤ n ≤ 100) and prints sunglasses with a size of 5*N x N as found in the examples:

From the examples, we can see that the sunglasses can be divided into three parts – upper, middle, and lower. Below is part of the code with which the problem can be solved. When drawing the upper and lower rows we need to print 2 * n asterisks, n whitespaces, and 2 * n asterisks: 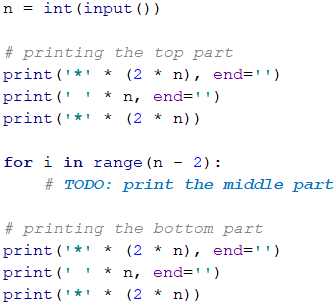 When drawing the middle part, we need to check if the row is (n-1) / 2 - 1 because in the examples we can see that in this row we need to print vertical slashes instead of whitespaces: 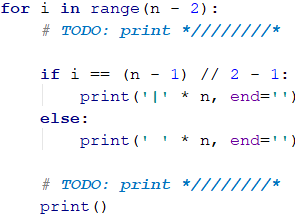 We understand from the description of the problem that the house is with a size of n x n. What we see from the example input and output is that: 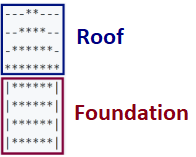 We read the input number n from the console and write its value in a variable:

To draw the roof, we write down how many asterisks we start with a variable called stars:

Calculate the length of the roof. It equals half of n. Write the result in the variable roof_length:

Note: To use math.ceil (), which rounds to the larger integer, regardless of the fractional part, it is necessary to import the library math. This is done with the command import math. It is recommended to write import math (as well as all other imports) at the beginning of the file.

It is important to note that when n is an odd number, the length of the roof is one row more than that of the base.

In Python, when two integer types are divisible and there is a remainder, the result will be a number with a remainder. If we want to perform a pure integer division without a remainder, it is necessary to use the operator //.

If we want to round up to the next largest integer number, we need to use the method math.cail(…): result = math.ceil(3 / 2).

After we have calculated the length of the roof, we make a loop from 0 to roof_length. On each iteration we will:

After we have finished with the roof, it is time for the base. It is easier to print:

If we have written everything correctly, our problem should be solved.

Write a program that receives an integer n (1 ≤ n ≤ 100) and prints a diamond with size N, as in the following examples:

What we know from the problem's description is that the diamond is n x n in size. From the example input and output we can conclude that all rows contain exactly n symbols, and all the rows, except for the top and bottom ones, have 2 asterisks. We can mentally divide the diamond into 2 parts:

Upper and Lower Parts of The Diamond

We read the value of n from the console, converting it to type int:

We start drawing the upper part of the diamond. The first thing we need to do is to calculate the number of the outer dashes left_right (the dashes on the outer side of the asterisks). It is equal to (n - 1) / 2, rounded down:

After we have calculated left_right, we start drawing the upper part of the diamond. We can start by running a loop from (n + 1) // 2 (i.e. rounded down).

At each iteration of the loop the following steps must be taken:

We are ready with the upper part.

Printing the lower part is very similar to that of the upper part. The difference is that instead of decreasing left_right with 1 at the end of the loop, we will increase it with 1 at the beginning of the loop. Also, the loop will iterate from 0 to (n - 1) // 2: 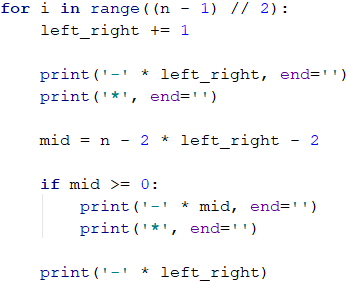 Repeating a code is considered bad practice because the code becomes very hard to maintain. Let's imagine that we have a piece of code (e.g. the logic for drawing a row from the diamond) in a few more places and we decide to change it. To do this, we will have to go through all the places and change it everywhere. Now let's imagine that you need to reuse a piece of code not 1, 2, or 3 times but tens of times. A way to overcome this problem is to use functions. You can search for more information about them on the Internet or view Chapter “10” (Functions). </tr></table>

If we have written all correctly, then the problem is solved.

What Have We Learned from This Chapter?

We learned about one of the ways to create strings:

We learned how to draw figures using nested for loops:

Now that we got used to the nested loops and the way to use them to draw figures on the console, we can get into something even more interesting: we can see how loops can be used to draw in a Web environment. We will make a web application that visualizes a number rating (a number from 0 to 100) with stars. This kind of visualization is common in e-commerce sites, reviews of products, event rating, rating of apps, and others.

Don't worry if you don't understand all of the code, how exactly it is written and how the project works. It is normal, now we are learning to write code and we are a long way from the web development technologies. If you are struggling to write your project by following the steps, ask for help in the SoftUni's Reddit Community: https://www.reddit.com/r/softuni/.

Develop a web application for rating visualization (number from 0 to 100). Draw from 1 to 10 stars (with halves). Stars to be generated with a for cycle.

We start by creating a new project in PyCharm from [File] -> [New Project] (or from the start window): 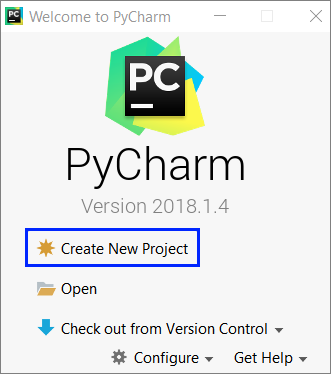 We give a meaningful name to the project, for example "Ratings". We choose the type of the current Python interpreter. Let this be the default: 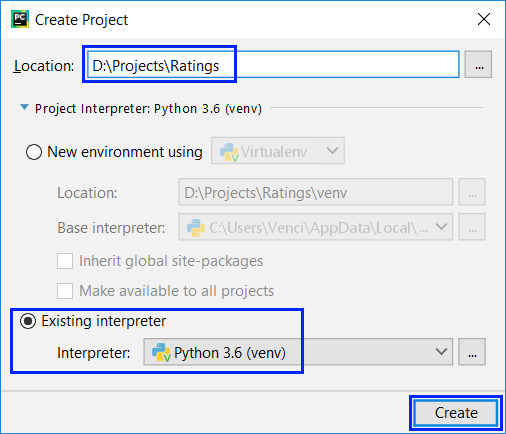 We will again use the Flask library, which is used to create web applications. Before we can start coding, we need to install Flask. Let's recall how to do this. We go to the settings of PyCharm [File] -> [Settings] -> [Project: Ratings] -> [Project Interpreter]. There, we press the + button: 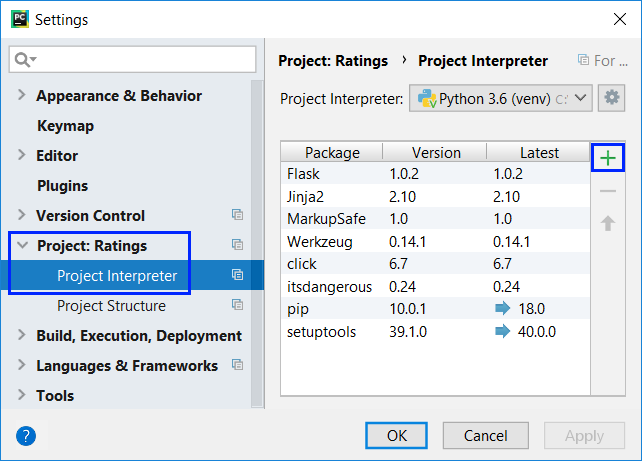 Look for Flask in the window that appears and click the [Install Package] button: 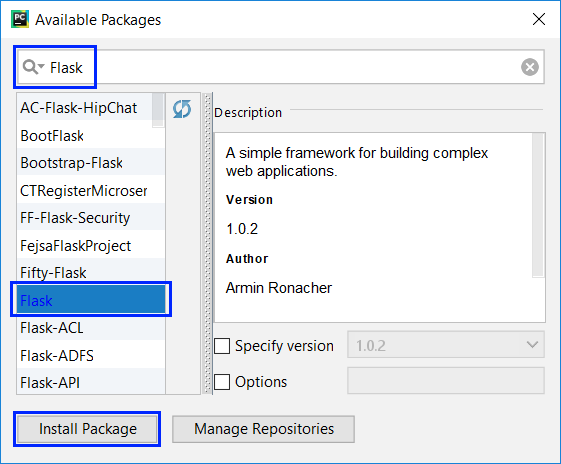 We are now adding the structure of the project (the assignment files for this project can be downloaded from here). Copy them from Windows Explorer and paste them in the Ratings project folder with Copy/Paste: 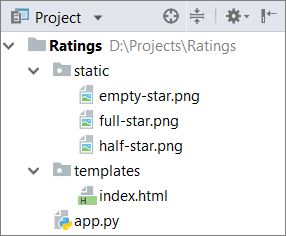 For everything to work, we need to add the code. First, we go to the file index.html (from the templates folder) and look for the TODO sections. In their place we enter the following code: 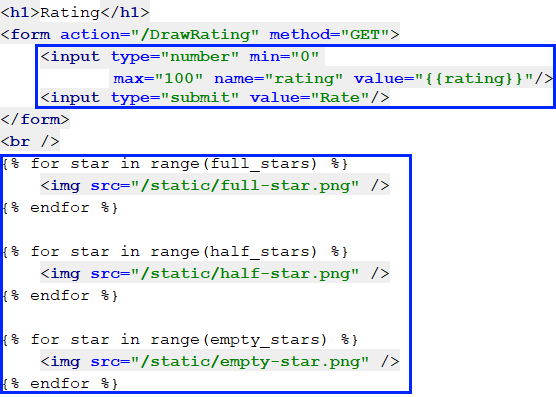 The above code creates a web form <form> with one field " rating " for entering a number in the interval [0… 100] and a button [Rate] to send the data from the form to the server. Then, draw with three separate for loops the corresponding number of stars - filled, half-empty and empty.

The action that will process the data is called /DrawRatings, which means the function draw_ratings () in the file app.py: 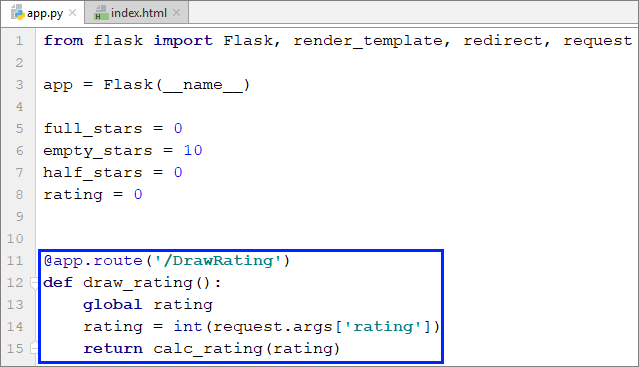 We go to the specified address and enjoy the finished project:

If you have problems with the sample project above, you can ask questions in the SoftUni's Reddit Community: https://www.reddit.com/r/softuni/.